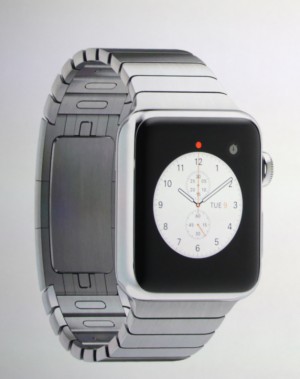 Apple’s eagerly anticipated Smart Watch is almost here. Launching in 2015, Apple’s have dropped the “i” choosing to put their brand front and centre, by calling it the “Apple Watch”.

Hordes of Apple and Android fan boys are already duking it out online as debates on the merits of Apple Watch VS Android Wear grind onwards. Regardless of the online noise, here’s our take on the pros and cons of the Apple Watch.

Apple Watch
It’ll be available in three flavours. There’s a basic starter edition. Apple will also offer a sports model which should be more durable than the basic edition. For those with a a bling fetish, there’ll also be a high-end “Apple Watch Edition”, finished in 18K gold.

Regardless of their differing cosmetics and sticker prices, they’ll all be the same watch.

Whichever you choose (assuming you’re buying), they’re all equipped with touch displays, protected by a layer of scratch resistant sapphire.

In use the Apple watch is navigated using a mixture of touch gestures and twirling/pushing the “digital crown,” on its side. The Apple Watch also links back to Siri on an iPhone so you’ll be able to stand around and yell at it.

The Apple watch also has a slew of health-monitoring capabilities baked in. This equates to infrared LEDs and photo sensors on its underside that can check your pulse. Accelerometers and a gyro will also count other activity such as walking, standing or sitting.

Its powered by an S1 processor, and uses the Wi Fi and GPS radios built into an iPhone. Charging is done using inductive charger, which eliminates fragile contacts and should in theory add to its ruggedness.

Apple has also added NFC. In theory this means the Apple Watch is usable as a cash card or even a hotel room key. At the launch event Apple talked up Apple Watch apps that’ll access home-automation widgets. Again doing this will require you have an iPhone 5 or better.

Verdict
The Smart Watch category has only really smoldered – It has yet to fully catch ablaze. Pebble got things started (mines an indispensible part of my gadget ensemble) but few non-geeks even know what a smart watch is.

This said, Apple have a tried and proven track record of taking tech to the mainstream. Here’s hoping they can do it again.