The Museum of Art and Digital Entertainment in Oakland, California has announced that they will be spending one day this weekend attempting to resurrect the world’s first ever MMO (massively multiplayer online) game, Habitat, from Lucasfilm. Today, Sunday, September 28th, will be dedicated to seeing if it is possible to bring the game back from the grave. In a 24 hour long “hackathon”, users will be able to connect to the game’s original Stratus Technologies server with a Commodore 64 emulator. If the hackathon is successful, the Museum of Art and Digital Entertainment will continue to support the MMO’s server while also trying to develop new, modern code and server hardware for it. 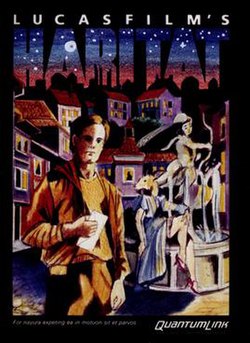 This ambitious endeavor is being officially assisted and allowed by Fujitsu, the company that owns Habitat’s license, and KIXEYE, a mobile developer that specializes in mobile MMO gaming. Habitat was originally launched back in 1986 as a beta, where users with their own individual computers connected to a larger mainframe through the online network with the mainframe “host” processing, transferring, and relaying information in real-time to each user. Though Habitat wasn’t graphically impressive for its time, it was revolutionary in its attempt to present an ever-present online community for gamers. Players could barter goods, steal, and even kill other players. Habitat would go on to become the basis for all other online games that would come to be. Let us know in the comments if you’re interested in revisiting this piece of history and for all things MMO’s, keep it locked right here.