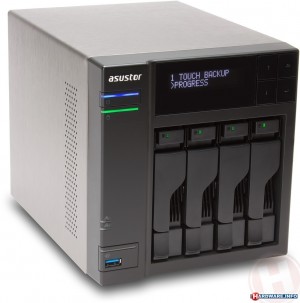 Who’d have thought that having a way of storing/retrieving data over your home network would become so critical for so many?

It’s little wonder given the sheer versatility of NAS drives. Not only do they provide a central point for storing documents, they also stream media. Network attached storage (NAS) devices have become must-have gadget for many a well geek in the know.

This hasn’t escaped the attention of Asus who recently formed the Asustor spin off subsidiary. They’ve launched the 604T, a high-end consumer grade NAS. About the only thing I couldn’t get it to do is make a cup of coffee, but there’s probably an app for that.

There’s no shortage of bells and whistles. The 604T sports 4 drive bays and some serious multimedia savvy – including an HDMI port for hooking it up to a telly.

Look and Feel
Although it’s consumer-focused, the 604T’s design would look at home in a data centre rather than my lounge.

This said, it’s built like a brick you-know-what house, and weighs in at a hefty 3.4KG. The upside of this is that it makes the 604T relatively burglar proof. It is also sufficiently petite at 230x185x170mm that you could throw it at a burglar and seriously injure them.

In short it’s a solid piece of gear, straight from the Darth Vader school of design. It is also small enough to fit in most AV racks. Its black-on-black design also makes it pretty unobtrusive.

In Use
The 604T sports 4 drive bays (the review unit was equipped with 2x 1TB drives). Hard drives screw into holders and that slide in and out with a solid “thunk”.

Powering up the 604T revealed whisper quiet operation. About the only audible component was a 120mm fan and even that was barely noticeable in a typical lounge environment.

Its killer feature(s) were its HDMI port, remote and massive app store. My first download was XBMC, which is hugely popular with the DIY media PC brigade for a multitude of reasons. For a start it has a huge developer base, it’s also hugely customisable and has wide codec support so it’ll play nearly any media you’re ever likely to chuck at it.
The store is called App Central, and is Asus’s equivalent of Apples App Store. There’s a heap of available apps. All the apps in App Central have been vetted by Asus, which in theory should translate into improved stability (as was my experience with XBMC). App categories span media servers, security, hosting plus many, many others.

Another biggie with NAS drives is their ability to act as backup devices. The built in server on the 604T can work as a Time Machine backup server. It mightn’t be hugely exciting, but automated backups do translate into one less thing to worry about.

One feature I didn’t get a chance to test but imagine many a buyer would appreciate is what Asustor calls ‘system migration’. This allows you to take drives out of an existing Asustor NAS and drop them into a newer Asustor NAS. It’d be dead handy for to data migration at a future stage. Unfortunately all disks must be of equal capacities before you can expand, and this could make expansion quite an expensive undertaking.

Screwing drives into the 604T did mean getting started took a little longer, but it also meant that drives fitted snug. Nothing was loose or vibrating. This also contributed to the 604T’s near silent operation.

Having hooked the 604T to my Router and a wall socket, I downloaded the ‘Control Center’ app from the Asustor website. Once installed, the software detected the Asustore NAS on my network and the setup process kicked off. After this stage completed I was able to do everything using my browser.

When transferring large files, read and write speeds hovered around 74-86MBps and 61-73MBps (using a RAID 5 configuration). Smaller files were a tad slower at 30-34MBps and 20-27MBps but performance was still fine with typical usage.

As a media centre the 604T is hard to beat. XBMC is far more flexible than most other offerings on the market and having it baked into a NAS frees up scarce AV cabinet space. The biggest benefit is reliability. PC media centres can be quite finicky and frustrating. With the 604T I could power it up and use it like an appliance. It just worked.
Verdict
There’s a lot to like with the Asustor 604T. It’s a cracking good media centre that is so solid build-wise that it could do double duty as a nuclear fallout shelter. On the performance front it also acquitted itself well.

Unlike a lot of other NAS units I’ve tested in the past, the 604T is whisper quiet and well built. This combined with its solid performance makes it a pretty good deal.

The only real downside is its RRP of $536, which given it doesn’t ship with any hard drives seems a tad steep. This said, the 604T is a media player and a NAS device. This arguably equates to good value compared to buying both separately, though this still depends on hard drive costs.

August Smart Lock is the Answer to Your Locked Door Dilemma