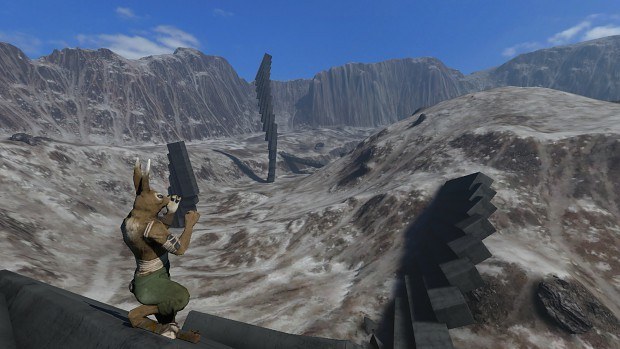 Parkour. Extreme combat. Fuzzy bunny rabbits. Overgrowth is an independent game that seems to have it all. Overgrowth is a game that has been in development for close to three years and after you read this review you’ll be sad to hear it has another year or so to go. The game is a sequel to developer Wolfire Games’ first game Lugaru, which followed the adventure of an antrhopomorphic rabbit and his quest for revenge against an evil king. The fact is that, story wise, nobody really knows what the story is apart from the developers. However, the Alpha (not even a Beta yet) is plenty of fun to tide us over until its official release…whenever that may be.

Half of what makes the gameplay in the Overgrowth Alpha so fun is the free running. You can leap extremely high, run along walls, run up walls and end the height of your run with a back flip. The laws of physics are yours for the breaking. You can even run along a wall, jump into another wall, and get to the top of the wall with incredible speed. But this game is far more clever than simple superhuman abilities. By losing the laws of gravity, new ones are placed in its stead. If you land mid-flip, the AI will have your body react the same way it will in real life: you will injure and/or kill yourself.

One of the stand out features of overgrowth is its brutal combat system. This is not like other games where the main character is somehow more able to take damage than the enemy characters. Your enemy can kill you just as quickly as you can kill them, and the game doesn’t give you much time to strategize. If your enemy doesn’t see you for a few seconds, then that is the only time you have to formulate a plan to take them down. If they have weapons then you better hope you have one too because the odds of losing just skyrocketed. Is there more than one of them? Even worse then. Fights are quick, and

The reason that combat is so swift and brutal is because there is no health bar and no heads up display. In fact there is no real health indicator, unless of course you count the snap of your character’s bones breaking. Each modeled character possesses an internal skeleton and when that skeleton is faced with stress that would break it in the real world, it has realistic reactions. This is why in combat the quickest way to win comes in the form of neck snapping.

One of the key features of the Alpha is the ability to alter the included levels. You don’t like the weapon selection? Add more. You want more of a challenge? Add more opponents. The level builder is fantastic and lends itself to hours upon hours of fun.

If you want to check out the Overgrowth Alpha, you can do so right here, but it’ll set you back $30!