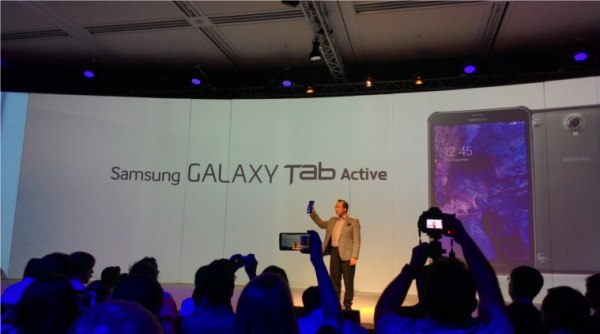 The Active range from Samsung has been around since the Galaxy S4, however it has previously been exclusive to a small range of smartphone devices. At IFA this week, Samsung announced a brand new device that breaks the previous boundaries of the Active range and brings it to the tablet space for the first time. The result is the Samsung Galaxy Tab Active, and it is a new rugged style tablet with a lot under it’s belt. 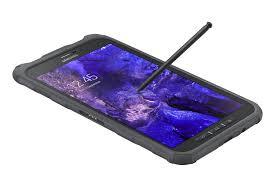 The whole idea of the Active range is to offer better protection for those who have a more active lifestyle, so the idea of the Samsung Galaxy Tab Active is a little odd at first, but the extra protective features of the 8 inch device could make it a nice choice for those who choose to take a tablet with them on their daily commute.

The Galaxy Tab Active is only IP56 certified, so although it’s not going to go down well in a pool of water, it is “weatherproof” which means it’s going to be able to deal with rain, dust and wind without any problems. The new Active tab from Samsung should also be able to deal with drops and fumbles a little better than the standard Galaxy Tab range, but it’s no Toughpad, so it is still breakable. 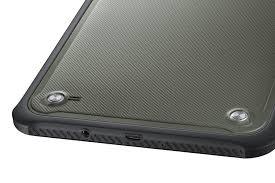 As far as hardware is concerned, the Galaxy Tab Active isn’t anything special – the device comes with a 1280×800 TFT display, a 1.2GHz quad core CPU, and 1.5GB of RAM. The battery is a nice 4,450mAh, making it the highlight of the spec sheet.

If you need a small form tablet for business, school or work, and are prone to clumsiness or terrible weather, the Galaxy Tab Active could be a good choice for you. There are much better alternatives, but it’s weatherproof capabilities make it worth looking into.