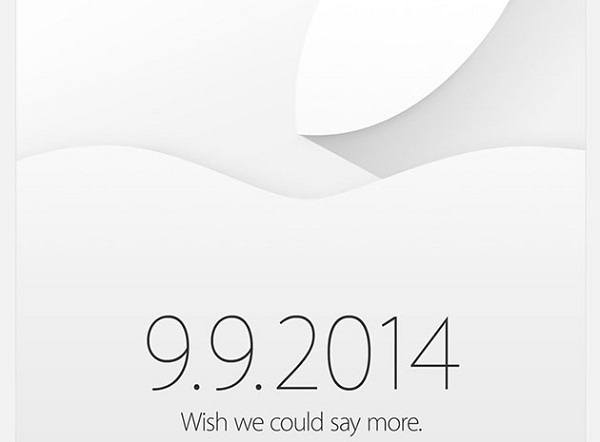 Buzzing like a really pissed off hive of bees in the midst of the Summer hayfever season, everyone and their brother have been talking up Apple’s next reveal. Widely thought to be bringing a brand new iPhone to market in just a few weeks’ time, speculation has been rife about just what else the Cupertino, Calif. company could bring to the table. We know that wearables have been a portion of the market steadily growing in interest (both LG and Samsung already have smartwatches out) and those who love Mac operating systems but hate the pricing of Apple’s desktops and laptop computers will never quieten hopes of a new Mac Mini. But the truth is, no one really knows exactly what Apple have up their sleeve but on September 9th we’re set to find out.

That’s down to some swish invites that Apple sent out to the press (and for the press to repost them across the web, naturally) touting and event that they “Wish [they] could say more] about. Oh Apple, you big tease you.

They needn’t play quite so coy though as everything points to the iPhone 6 making its official debut after months of rumours and leaks. We’ve heard plenty of mutterings about the iPhone 6’s sapphire screen but recent production issues in the last few weeks or so mean that the potentially back of the box feature may have been shelved. Similarly, we’ve also heard that Apple could be debuting a new, slimmer battery and NFC (near field technology) but existing battery problems with iPhones have cast doubt on that too.

Also up for speculation is the iWatch. It’s been talked about for a good two years now, without a single official word said about it. If Apple were going to release an iWatch, however, then right now would be perfect. If they wait until next year, Samsung, LG and other electronics makers could have gobbled up the market and made wearables an Android-dominated space and that could be disastrous for Apple’s iOS. It’s also worth nothing that iOS8 (Apple’s next operating system) has a health and fitness focus which would fit perfectly within the iWatch’s capabilities.

Regardless of what Apple show off, it’s guaranteed to be very exciting and, as trends would warrant, we’ll be covering it here on TechieIO too. So stay tuned once September 9th rolls around for more info.

Are you excited for Apple’s September 9th event? Leave a comment and let us know.