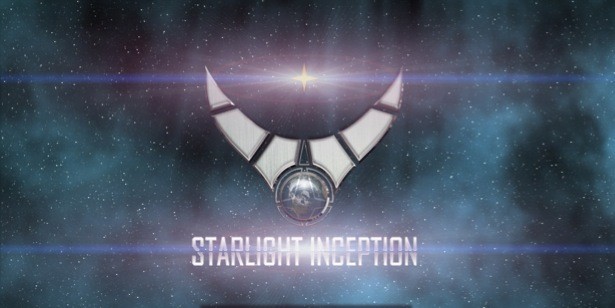 Starlight Inception is the latest in a wave of games attempting to capitalize on the hype surrounding the revival of the space sim genre. With the likes of FTL, Star Citizen, and more, the future seems bright for those wishing to create their own space adventures. However, Starlight Inception is not an example of that bright future. Another sad example of a Kickstarter game gone wrong, Escape Hatch Entertainment made a game that at least had potential. Sadly, plagued by some technical issues (a lot of which were alleviated through patches), shallow gameplay, and just downright not being fun, Starlight Inception is nothing shy of mediocre.

The game is a mix between third person space combat and first person exploration, though the latter isn’t really useful. In between missions in the relatively short campaign, you can wander around different parts of the ship and basically extend the game’s time. There isn’t much to do except look, and what there is to look at typically isn’t that great. One of the first issues I had with the game was that it is just not graphically impressive in the slightest. This game looks as mediocre as can be. That wouldn’t be too much of an issue if there were actually stuff to do on the ship, but there isn’t. When I think of space, I think of grand adventures alongside a cast of unique and well-developed characters but Starlight Inception has none of that. There are no crew members to get to know and develop relationships with, there are no minigames, or side quests or much of anything to be found exploring the ship. It is simply a means to get from mission to mission.

This would be fine, if the missions were exceptional but that’s not true either. The campaign follows the events of World War IV (who knows what happened to World War III), in which some rebel group or another wishes to take over Earth and the rest of the solar system, and you are the only one who can stop them. Beyond that, there really is not much more plot to be found here. Each mission throughout the campaign consists of multiple objectives that are simply as follows: go here, shoot stuff, now go here, shoot more stuff, and then return to ship. There is no meaning or motivation driving the player to push through the repetition. The missions themselves are made in bite-sized pieces that can be finished in about 10-15 minutes each, but the mediocrity of the missions will stop you from wanting to spend even that amount of time with the game.

The only thing that is actually decent about the missions is the gameplay itself. Taking place from a third person perspective, you command one of 30 different ships with multiple types of weapons and upgrades to choose from. Unfortunately, most of the ships feel no different than another. Even the weapons don’t extend outside the boundaries of your standard machine guns or missiles. The good thing though is the flying around and shooting, both of which are done right and feel smooth. The bad thing is it that they are still too typical and shallow to motivate anyone to continue playing the single-player campaign. The backgrounds are completely static, so the game ironically feels empty and dead at times. The few times you actually leave space for planet-side missions are still graphically unpleasing. The AI enemies you will be playing aren’t that smart either, so even if you aren’t good at this game, you shouldn’t have much of a problem. In the later levels, the amount of enemies do grow, but it still never even remotely reaches a level of challenge that most hardened space cadets crave from a game like this.

The issues with AI-controlled enemies, however, can be avoided by playing against real humans in multi-player and Escape Hatch Entertainment was smart to include it. The multiplayer includes your typical assortment of modes like Team Deathmatch and Capture the Flag, but there were literally so few people to play with, that I wasn’t even able to review that portion of the game. Despite the number of backers that funded the game, the Vita still has a niche user base and that coupled with a very niche game has led to an almost nonexistent online community.

Thankfully, if there is one good thing that came out of Starlight Inception, it is the Tower Defense game. The third mode found in the menus alongside the single-player and multi-player offerings, this unique 3D tower defense game has you protecting your ship, while also setting up and managing defense turrets. This mode is really well done and fun, but because it is simply meant to be a nice distraction from the main game, there isn’t a lot to it. Sure, it is entertaining for a little bit, but it honestly would work much better as its own standalone game and not just a nice addition.

Overall, Starlight Inception is an unfortunate example of a very mediocre space sim. Be it because of financial, time, or small team constraints, Starlight Inception oozes potential but it never reaches beyond that. Even a nice tower defense game doesn’t warrant this a purchase, considering the single-player isn’t much fun and the multi-player has almost no matches being played. Only space fans desperate for a unique experience on their Vita should give this chance and even then, don’t expect anything groundbreaking.